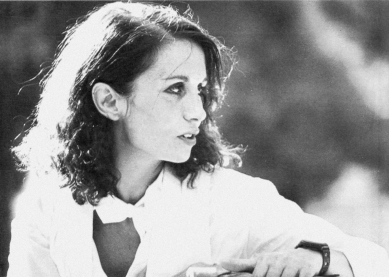 With my head in smithereens
by the vise of your bargainings
at the height of the traffic jam and opposite it
I’ll light a great fire
and I’ll throw all the Marxist books in it
that Myrto will never learn
the cause of my death.
You can tell her
I couldn’t endure the spring or that I cross the road with a red light.
Yes. This is more believable:
with a red light. This you can say.
Α

Katerina Gogou (Greek: Κατερίνα Γώγου; 1 June 1940 – 3 October 1993) was a Greek poet, author and actress. Before her suicide by pill overdose at the age of 53, Gogou appeared in over thirty Greek films. She was born in Athens, Greece.
One of her books was translated into English, “Three clicks left” in the United States in 1983 by Jack Hirschman and published by “Night Horn Books” in San Francisco. The Greek title was, ‘Τρία κλικ αριστερά’, and first published by Kastaniotis in 1978. Her poetry was known for its rebellious and communist content.
As an actress she was known for lesser roles of rebellious free spirited women. She won the first women’s award at the Salonica film festival.
As a poet she is known for her antiestablishment poems and her anarchist ideals. Her verse is filled by indignation and refute however her ideals, her wounded psychological state lead her to suicide at the age of 53.
Numerous poems written by Gogou appeared in the Greek film ‘Parangelia’ about the life of Nikos Koemtzis who, in 1973, killed three individuals (two of whom were policemen) and injured another eight at a bouzouki club in Athens over a dance.