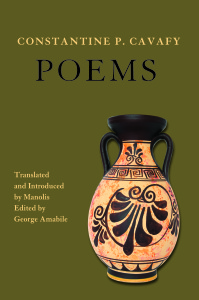 Constantine P. Cavafy, along with a few other twentieth century Greek poets such as George Seferis, Odysseus Elytis, Yiannis Ritsos, Kostis Palamas and Andreas Kalvos, established the revival of Greek poetry both in Greece and abroad. They emerged as the new era of contemporary Greek poets at a time when the use of the Greek language was swept by the conflict between the old, “καθαρεύουσα—katharevoussa” traditional form of language and the more common “δημοτική—demotiki”, plebian or demotic as it was called.
Cavafy used both the traditional and the demotic modes although mostly the latter; he spent most of his life in Alexandria under the influence of the almighty Greek Orthodox Church and the day before his death he took communion as if to declare that he was ready; as if he was prepared for his transformation, from the modern poet, Konstantinos Petrou Kavafis of Greece to the Cavafy of the World. It is said that in the last minutes of his life he took pencil and paper and drew a big circle with a single dot in the middle.
It had only been twenty years since his death when one of the most famous bookstores in London advertised that: “We carry the best ever books: from Chaucer to Cavafy.” In 1919 Cavafy was introduced to the English reading public by E.M. Forster who helped establish his reputation in the Western World.
His poems combine the precision of a master craftsman with the sensitivity of Sappho as they are concise, yet intimate when their subject is erotic love, mostly between men. Real characters as well as imaginary, historical events as well as fictional are his inspiration; the questionable future, the sensual pleasures, the wandering morality of the many, the psychology of the individual and that of the masses, homosexuality, certain atavistic beliefs and an existential nostalgia are some of his themes. Cavafy’s conscience projected his crystal clear belief in the immortal written word, which he bequeathed unto the four corners of the world.
On the 100th anniversary of his birthday and thirty years after his death, his complete works were published by “Ikaros” in 1963. This edition was prepared up to a point, we could say, by the poet himself who had kept all his poems in a concise and exact order; each poem on a page (which was pinned in exact chronological order on top of the proceeding page); his older poems were turned into booklet form which traditionally consisted of 16 pages although in this case the length is questionable. The sequence of the poems in these booklets was not chronological but thematic and depended on how he chose to emphasize their coherence. These booklets were mailed to anyone who asked for them. In the last years of his life he published two such booklets, one containing his poems written between the years 1905-1915 and the other with his poems of 1916-1918; every poem published during those fourteen years were included in these two booklets.
Cavafy was concise and accurate; so much so that he would work on each of his verses again and again making sure that it was in its final and perfect form before he would mail it to anyone; most of this of course is lost in the translation, as such an element in writing is impossible to replicate in another language. He drew most of his inspiration for the historical poems from the first and second centuries B.C. and the Hellinistic Era of Alexandria around and after the days of Alexander the Great. His love poems were entirely devoted to adult love between men; there is not a single mention of a woman as the subject of erotic love in his poems. The image of the kore, an erotic subject of other poets, is absent from his stanzas. Reference to women in Cavafy’s work is only about older, mature and gracious figures playing out their roles in the Hellinistic era or Byzantium’s golden age.
Cavafy wrote mostly in free verse although there were times when he used rhyme to emphasize irony; the number of syllables per verse varied from ten to seventeen.
Cavafy’s inspiration derives from many different subjects; in one of the well- known poems, Ithaka, he explores, like Odysseus on his return to his home island after the Trojan War, the pleasure and importance of the way to a goal rather than the goal itself, and shows that the process of achieving something is important because of all the experience it makes possible.
In the poem Waiting for the Barbarians we see the importance of the influence that people and events outside of the country may have in the lives of the inhabitants of a certain place and it can quite easily be related to today’s doctrine of “war on terror” after the attack of September, 2001 and the role that fear of the foreigner, or the enemy, plays in the decision making process of a nation. A parallel can be drawn between today’s “war on terror” and the final verses of the poem…
“And what are we to become without the barbarians?
These people were some kind of a solution.”

In the poem Thermopylae Cavafy explores the subject of duty, responsibility, and most importantly, the idea of paying the “debt”; he seems to believe in the philosophical principle of the Universal Balance which exists everywhere, and when that balance is disturbed by the actions of one man another person needs to reestablish it: in this case the poem refers to the treason by Ephialtes which disturbs that preexisting balance and which the leader of the 300 Lacedaimonians, Leonidas, tries to counter—balance by his act of self sacrifice. The crucifixion of Christ has the same philosophical base. Odusseus Elytis refers to the same subject in the Genesis of his Axion Esti (it is worthy) where he says that the Old Wise Creator prepared the four Great Voids on earth and in the body of man: